My wife is about to give birth to our 1st child & we’re learning a lot about nutrition from the experience.
Someone in my nutrition coaching group (for us as coaches) asked about coaching pregnant women 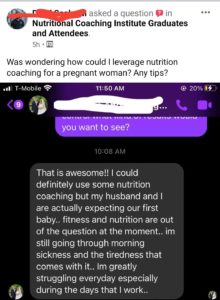 Of course, this experience is new to me, so “absorb what’s useful, reject what isn’t”, as Bruce Lee would say

For some background, my wife was a very precise macro-counter with very strict targets before this.
The biggies:

During the first 3 months she was miserable. So all bets were off. Whatever she wanted, she got.

Body image has been hard. Both with weight gain and the change of identity from someone who works out regularly to someone who’s barely wanting to get off the couch.
She’s definitely needed a lot of compassionate support through this.

As she felt better, walks and now light training have been huge helps for her
She bought a training program for pregnancy. I’m not sure what it’s called, but she hopes it’ll make childbirth easier on her bc her muscles will be able to handle the difficulties
Compared to a lot of complaints we’ve heard from others about the physical toll that pregnancy & childbirth can take, she feels like the training has really paid off so far.
Not to mention the dopamine she gets from it, which can be a big boost when so much time is spent stuck inside not wanting to move

Pregnant women who restrict calories, especially carbs, can have kids who deal with weight issues. So we’ve made sure to resist the temptation to minimize weight gain and to just trust that she has the tools to work her way back afterwards

If you’ve never heard of Reverse Dieting, it’s worth looking into. Layne Norton has a really in depth YouTube series on it.
It’s basically about eating more food in order to raise your metabolism as high as it’ll go and then cutting calories to lose weight quicker.
That’s how my wife is vewing this. Right now she’s approaching this 9 months as a metabolic rebuild so that when she’s ready to cut weight again she’ll have a huge headstart.
There you have it. Those are my best nutrition tips during pregnancy. Please share what tips you have in the comments below!
PrevPrevious
NextNext

KNOWING what to do and actually DOING it are two very different things! As a gym owner I’ve gotten to help 100’s of people hit

Nutrition & Weight Loss Is About Getting To Know Your Body

https://youtu.be/dwZegPkqQo4 I ❤️ hearing stories like this! Renee’s been in our 1-N-Done Weight Loss coaching program for a couple months now and is nothing but

3 Keys To Unlock A Strong Mindset

We will coach you and help you achieve your goals.
At Fighting Fit, we can help you every step of the way. Join our family and own your fitness. What are you waiting for? Take the first step today!

We Can't Wait to get you Started!

We have emailed you a comfirmation of your purchase. We will be in contact shortly to schedule a time for your visit.

In the meantime, please don’t hesitate to reach out with any questions!

Get Started With Your FREE Transformation Program Trial